Free shipping on all domestic orders from our USA warehouse. Delivery times are around 3-4 days.

Your purchases are protected by our Guarantee. See our Refund Policy.

This is the best toy I’ve used so far. It feels amazing and gets me “right” every time. It’s honestly almost addictive lol. My boyfriend loves it as well

Thank You for the honest review and glad you both love it :)

A
Alina Kroll
The rose sucking and thrusting toy is a really fun and cute toy!

This was my first time trying a toy that sucked or thrusted, and I was pleasantly surprised with both parts! The suction is meant to mimic oral sex. It feels like a vibrating/sucking sensation, and I like using a little bit of lube on that part. It can be a little intense, so I liked using it around my clit instead of directly on it. The thrusting part is super cool too! Like the sucking part, it has 10 different modes. Some of them are faster or slower and others have a pattern where the toy pauses, then thrusts. It’s a lot of fun to play around with the different patterns.

You can use the sucking part and thrusting part individually or at the same time. I found that sitting up or kneeling worked best to hold the toys in place, but laying down would probably be good too! I even brought this toy into the shower once, which was fun! It’s waterproof so you can use it in there (:

The toy has a little metallic charging part that magnetically grabs on to the charger. The charging cord can be used with a regular USB port. The toy came partly charged for me, and didn’t take a long time to charge. It’s been holding a charge well too!

One thing I would recommend is cleaning the rose petals very carefully. The instructions said to be careful because water and bacteria can get stuck in there. I cleaned it with soap and water, then pressed a piece of paper towel in the rose petals to dry them as much as possible. I also recommend hanging the toy with the rose facing downwards to dry (like hanging it on the back of a chair or something).

Overall, I’m really happy with this toy! It’s cute, sexy, and works really well! I would definitely recommend this to anyone who likes vibrators and oral sex and is looking to try a fun new toy! (: 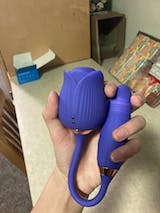 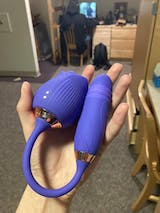 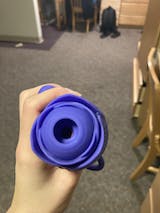 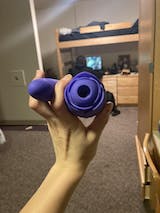 Thank You babe for the lovely review! You explain things so well :)

OMG! I really love my toy! I read a review about the adultluxe godsend and I just had to get it. They had a weekly deal posted on reddit and Im glad I went for it! I got the purple toy. taking off one star because it is a bit powerful on my clit but other than that its amazing!